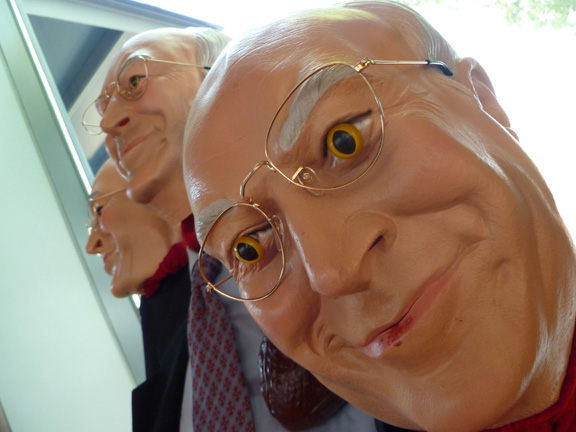 This is Dick Head, the six-headed Dick Cheney costume. Meet Executive Frankenstein.  I figured the smirk on his face signaled he was pleased with himself, so I put a mask on an extend-able neck.  You can work it from inside the suit so Dick can make out with himself.

Dick is a riot to wear.  Once, just for kicks, I faced off against a guy dressed as a Golden Shower in a costume competition.  We became fast friends and drank together into the night; it was poetry.

Once I wore Dick out dancing.  I could see people swarm around.  The camera flashes were pretty trippy inside the mask.  Dick’s fans mostly wanted to boogie with evil, or to punch me.

He has spent most of the last few years in seclusion (a plastic tub).  He’s there now.  Most recently, Dick was stuffed and ventured out to an exhibition, curated by Tina Lee and held at the Hedreen Gallery.  Tina dignified the dark prince with a great description, so he was honored to hang out – to see and be seen at the gallery all summer.

“Dick Head was originally made as a performance piece.  He has six heads, loves to dance, eat all the food and generally suck the life from your party.”

Dick was stoked to get a seat in the window, where he could watch the common people go by.  The staff reported that he’d been making kids cry… as it should be.